Addition of a number twice - Pirate Gamer Online - Pirate Gamer Online For first, second, third, 4th grade math revision | Pirage Game | Math games online for children. This is an online math game in which students will review the concept of addition while fighting with pirates at sea. This game is for review. You can get more practice from the worksheets section as well. This game is a board game that contains a pirate, a dice, a board with several obstacles and math addition problems to solve. The opening screen of the game contains a pirate waving a sword, a treasure box and an island.
To begin playing, hit the “start” button. Although the rules of the game are easy to understand, you can make it easier for you by checking out the help section by hitting the “help” button. There are step by step instructions which players can follow.
If you hit the “play” button, you are taken to the next screen which is a board featuring several elements. The two main items to note are the pirate and the treasure island. In between, there are islands; some containing pirates, others volcanoes and others contain food for the rocky journey.
Your ultimate goal in the pirate gamer board game is to get to the treasure island without being attacked on the way. To do so, you need to roll the dice and answer questions that pop up correctly. Each outcome of the dice determines how many places you can move forward. The more places you move forward, the closer you get to your target. However, it is not as easy as that; if you fall on a pirate island, you will be sent back to the starting point and your journey begins all over again.
The game also features dolphins. They are your only accomplice in this game as they can help you to move two spaces forward. The pirate is your worst enemy on the contrary.
This game can be played by students in the classroom to review just about any skill. You can play alone or in a group. If you do it in a group, some members will roll the dice while others will focus on solving the problems that show up. You can also play this game at home in your spare time. Also remember to get your parents and siblings involved. It is quite an interesting game for the family as well.
This game has been played in many schools across the world and teachers like to add it in their Google classroom.
It is a free homeschooling resource and we always have it online 24/7. If you love the game, remember to share it in your groups. Also check out the video in this page in case you face any difficulties playin the game.
Hit the start button, roll the dice and be the best pirate gamer out there. 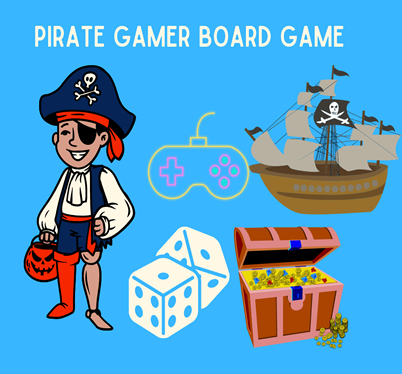 We offer PDF sheets in the highest quality.

We make our math lessons appealing to kids by blending activities with interesting board games.

We help parents and teachers supplement their kid's math course. Our resources are therefore free and can be shared online.